Ben Eine began his painting career as a vandal, leaving his first series of tags across London at a very young age. Eine was categorized as an artistic fugitive early on, police aggression a routine and common risk of the trade. Growing up, Eine’s group of friends were arrested frequently and the tagger’s life became risky. While many were incarcerated, Eine focused on the evolution of his work and craft, developing his own distinguished style. Bright, cheerful colors are at the core of his signature textology. Ben Eine established a studio titled Pictures on Walls which is globally recognized for its iconic screen printed works. 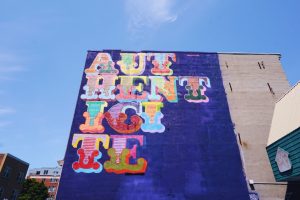