André Vermare is a french sculptor born on the November 27 in 1869 in Lyon. He was admitted in 1885 in national Beaux-Arts school in Lyon and became Charles Dufraîne’s student. From then, André Vermare continued his studies at Paris Beaux-Arts school where he became the
student of Alexandre Falguière, Laurent Marqueste and Alfred-Désiré Lanson. Then he exposed his art works at the Salon de la Société des Artistes Français where he received the Chenavard price in 1894 for his statue Giotto enfant. He lived at the Villa Médicis in Rome between 1900 and 1903 where he met Tony Garnier. It’s in that context that André Vermare produced on of his most known art works, Le Rhône et la
Saône which was placed at the entrance of Palais de la Bourse in Lyon.
In the 1900’s, André Vermare took for model a butcher’s girl who lived in Paris to realize his statue Jeanne d’Arc. Her long shredded tunic let pass her left leg armor and she holds, in her two hands, the flag pole near her heart. The steel copy of this famous sculpture is today in front
of the historic building of Montreal’s Union Française. After the realisation of this sculpture André Vermare collaborated with his father and his brother, in the family company, the Maison Vermare – Statuaire, orfèvrerie, ornements, bronzes and produced more religious statues. He also accepted a lot of orders et his carreer became national. He bought a farm and some lands in l’Ile-de-Bréhat between 1906 and 1910 where he bought a Summer house. He died there on the August 7 in 1949 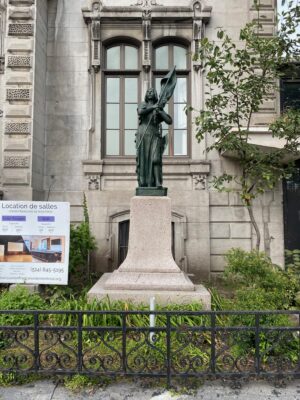