Henri-Georges Adam was born in Paris on 14 January 1904. Early in his career, he was a printmaker and associated with the surrealists. He began to work in sculpture in 1942, and the following year he produced his first major sculpture, Le Gisant. In 1947, he began to experiment with tapestry. He had a number of important exhibitions: at the Berne Kunsthalle in 1948, the Venice Biennale in 1950, the Milan Triennale in 1951, the Sao Paulo Biennale in 1953, Amsterdam’s Stedelijk Museum in 1955, and Documenta in Kassel in 1959. He received significant commissions for large tapestries for the French embassy in Washington in 1957, the Palais de l’UNESCO in 1958, and the Air France branch in New York in 1961. He had a major exhibition at the Musée national d’art moderne de Paris in 1966. Three of his artworks were presented at the 1967 World Fair. He died on 27 August 1967 in Clarté, Brittany. 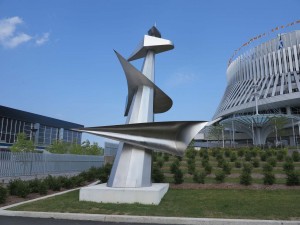