Auguste Rodin was born in Paris in 1840. From the time he was very young he loved to draw, and at the age of 14 he enrolled in the École Impériale Spéciale de Dessin et de Mathématiques. Beginning in 1857, he tried to gain admission to the École nationale supérieure des beaux-arts, but failed the entrance exam three times. For some years after, he worked for various decorators and decorative painters. In 1864 he began working as a sculptor and ornamentist in the studio of the sculptor Albert Carrier-Belleuse. Rodin created his first major work, “The Age of Bronze”, in 1877, exhibiting it in Brussels and then Paris. The figure it depicted was so realistic that he was accused of having cast it from life. The resulting controversy brought him to the public’s attention, and his career was well and truly under way. The following years saw the establishment of his reputation as a sculptor. In 1880 the French government commissioned him to create a monumental door for a proposed museum of decorative arts. Rodin, who decided to take as its subject Dante’s “Divine Comedy”, worked on the door, “The Gates of Hell”, until the end of his life, without ever finishing it or casting it in bronze. Nonetheless, his best-known sculptures originated in that work; the famous “The Thinker”, for example, was adapted from it in 1882. Three years later, in 1885, Rodin received the commission to create “The Burghers of Calais”, a group of statues in bronze. In 1888 the French government once again gave him a commission, to create a marble version of “The Kiss”, for the 1889 Paris Exposition Universelle. More commissions, for a monument to Victor Hugo intended for the Panthéon as well as a monument to Claude Lorrain, followed in 1889. Moreover, in 1891 Rodin was commissioned by the Société des Gens de Lettres for a monument to Honoré de Balzac. His work was shown in many exhibitions (in Prague, Düsseldorf, Paris, Vienna, Leipzig, Tokyo, New York, and Lyons) and the University of Glasgow and Oxford University each awarded him an honorary doctorate, in 1906 and 1907, respectively. In conjunction with the 1900 Paris Exposition Universelle, Rodin had a pavilion built on the Place de l’Alma to house a major exhibition of his own work. Known as the “Pavillon de l’Alma” exhibition, it was a huge success. Once the Exposition Universelle ended, he had the pavilion dismantled and rebuilt on the grounds of his country house in Meudon. In 1916, Rodin, by then seriously ill, donated his work and art collection to the French state in three successive instalments. This donation enabled the Musée Rodin to be opened in the Hôtel Biron in Paris in 1919. Rodin died on November 17, 1917, in Meudon. (voir la Description dans l’Autorité des personnes pour la traduction française) (Biographie de l’artiste rédigée, révisée et traduite au Musée (8 octobre 2015) 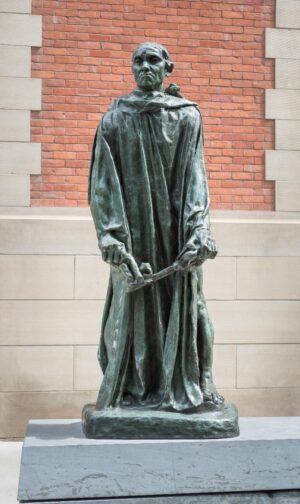