Born in Sainte-Perpétue de Nicolet, Germain Bergeron was first a priest in the Sainte-Croix congregation. He holds a bachelor’s degree in arts from the Université de Montréal (1963) and a master’s degree in arts from Notre-Dame University in Indiana, United States (1969). He has devoted a good part of his career to teaching, including at the Centre d’art de Duvernay and the École des beaux-arts de Montréal. Bergeron has produced a number of monumental works of public art. In the Montréal region, his Pic et Pelle (1976) is in the Monk Métro station, and at Île des Moulins in Terrebonne stands his Don Quichotte (1967), a work first presented at Man and His World. 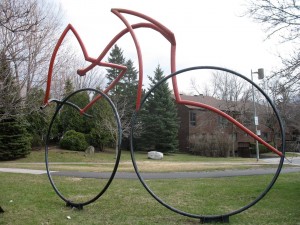