Coloured stripes are considered the artist’s signature. Their “neutrality” illustrates his self-referential, but contextual, conception of art. His public interventions, such as those in the court of honour at the Palais-Royal in Paris (1986) and Place des Terreaux in Lyon (1994), show how radically they can transform a site.

Buren has participated numerous times in the Venice Biennale and in Documenta in Cassel. His artworks have been in hundreds of exhibitions around the world, including Le musée qui n’existait pas, presented at the Centre Georges-Pompidou in 2002. 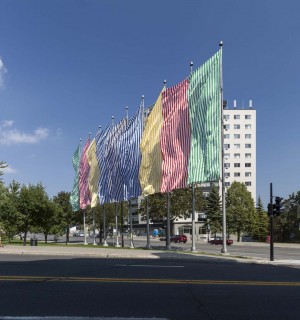