Johannes Burla was born in 1922 in Leipzig (Germany) and studied at the Schule für Gestaltung de Bâle (School of Applied Arts) from 1942 to 1946. He was a stonecutter and sculptor until 1956. He then became a teacher at the Schule für Gestaltung de Bâle. The same year, he participated in the Venice Biennale.
Aside from his job as a teacher, he created pieces for architects, for the general public and showcased in Bâle and in Zurich. In 1991, he was crowned champion of the Biennale and he created a commemorative gold coin to celebrate 700th anniversary of the Swiss Confederation. He spent most of his career in Switzerland.
Burla created many pieces for public display, be it in the context of an order or a collaboration with architects. He also did interior design, notably the entry hall to the University of Bâle’s library. 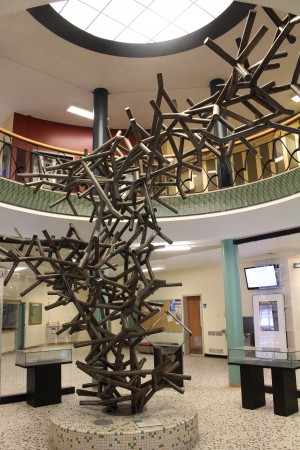