Born in Tacoma, Washington in 1941, Dale Chihuly studied interior design and architecture at the University of Washington in Seattle. Receiving his degree in 1965, he continued his investigation of art in his studio in the basement of his parents’ home, melting glass and blowing it using a steel pipe. The following year, he enrolled at the University of Wisconsin in Madison to further pursue his training in glassblowing, studying under Harvey Littleton. After obtaining a master’s degree in sculpture there, he went to the Rhode Island School of Design in Providence, where he explored environmental works using neon, argon, and blown glass. Armed with that experience and a second master’s degree, this time in ceramics, thanks to a Fulbright Fellowship he left for Europe in 1968 and became the first American glassblower to work at the Venini factory on the island of Murano. Chihuly is internationally renowned for having revolutionized the Studio Glass movement. His works are included in the collections of over 200 museums worldwide. A number of major exhibitions, such as Chihuly Over Venice (1995–1996), Chihuly in the Light of Jerusalem (1999), and Garden Cycle (2001–2012), have punctuated his career. Chihuly’s work has also been on view at the de Young Museum in San Francisco (2008), the Museum of Fine Arts in Boston (2011), the Virginia Museum of Fine Arts in Richmond (2012), and the Montreal Museum of Fine Arts (2013). The artist has lived in Seattle, where he has set up the Chihuly Studio and Chihuly Workshop, since the mid-1980s. 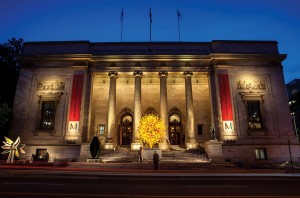 The Sun From the series “Chandeliers & Towers”
Dale Chihuly