A sculptor and glassmaker, Claude Bettinger was born into a family of artists and artisans in Lyon, and grew up in Alsace. He came to Quebec in 1952. A graduate of the École des beaux-arts de Montréal in 1963, he went on to obtain his Master’s in Art from the Université du Québec à Montréal. He also pursued doctoral studies at Université Laval, in Quebec City. Bettinger taught at the École des beaux-arts, and later at the Université du Québec à Trois-Rivières. His creative approach mainly found expression in architecture and public spaces. He was interested in the notions of memory, movement, light, and transparency. He created the stained glass in the Côte-des-Neiges station of the Montreal metro, and the massive work of public art entitled “The artist is the one who unveils the other side of things” at Place des Arts in Montreal. 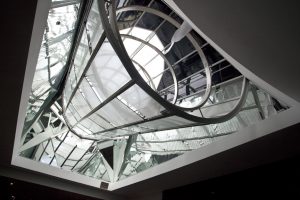