Los Angeles based artist Cryptik explores and dissects issues of spirituality and consciousness. His iconic depictions of deities and spiritual leaders in his signature style of calligraphy, can be seen throughout Los Angeles on the street and in galleries.

The Californian artist’s intricate, almost trance-inducing works bring together science, math, mysticism, the future and the past in works that are nothing short of masterful. Eastern philosophical thought and mantras hypnotically merge with the black letter cholo style bombing. The ancient and the sacred marry in a modern quest through art for a conscious awakening. 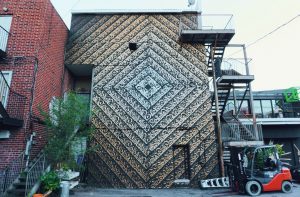