American sculptor and draughtsman Aaron Curry was born in San Antonio, Texas in 1972. He is a graduate of the School of the Art Institute of Chicago and Pasadena, California’s Art Center College of Design. Although his career is still young, he has already had solo exhibitions at Galerie Daniel Buchholz (in Berlin and Cologne), the Michael Werner Gallery (in London and New York), and at the David Kordansky Gallery (in Los Angeles). Los Angeles’ Hammer Museum, Hanover’s Kestnergesellschaft, and Bergamo’s Galleria d’Arte Moderna e Contemporanea have also given him solo shows. His work has been included in numerous group exhibitions—notably at the New Museum in New York, the Museum of Contemporary Art Detroit, and The Contemporary Museum, Honolulu—and received extensive coverage in the specialized press. One of his works (Deft Composition, 2009) illustrated the cover of the October 2010 issue of the magazine Art in America, which featured an article on the revival of monumental sculpture. Aaron Curry lives and works in Los Angeles. 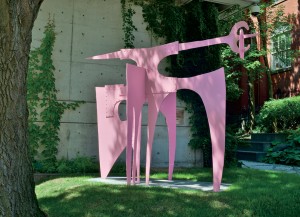