Jacques de Tonnancour hesitated between a career in science and the fine arts. He was not satisfied with the time he spent at the École des beaux-arts de Montréal. He furiously denounced academia and left after two years. Nonetheless, he continued to paint. He held his first solo exhibit in 1942 at the Dominion gallery in Montreal. After traveling to Brasil thanks to a government bursary, he ws hired a teacher at the École des beaux-arts de Montréal in 1948. During the same year year, he co-wrote Prisme d’yeux with Alfred Pellan, a manifesto that unified their opposition to the definition of avant-gardism in painting, arguing that it is too narrow. He was a resident artist at the UQAM in 1969, where he would teach until 1982. He then abandoned his artistic production to reinvigorate an old passion: collecting and photographing insects,

As he terrifyingly witnesses how Picasso becomes bound to his art, de Tonnancour painted very little from 1950 to 1955. He then returned to art by painting Laurentian landscapes. He can create many chromatic and formal variations with the use of a roller squeegee. His paintings would then get purer and purer. The painted backgrounds are then ready to host collages, accidents, symbolic allusions and geometric shapes.

Among his many distinctions, he earned a bursary from the Canadian Council for Arts and received the first prize at the Winnipeg show in 1958. In 1966, the Vancouver Art Gallery presented a retrospective exhibit of his work. De Tonnancour was named officer of the Order of Canada in 1979 and a member of the Order of Quebec in 1992.

De Tonnancour also created several pieces integrated to architecture. He painted the Université de Montréal campus in 1968 and created a part-painting par cut-up tryptich for the Dow planetarium in 1966. 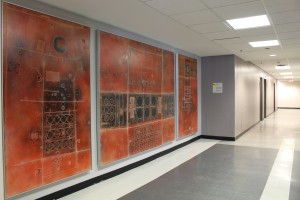 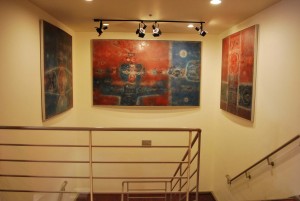