D*Face’s inspiration comes from New York’s early graffiti scene. Although, he’s from the United Kingdom, he has painted walls all over the world. His work, which mixes skulls as well as economic signifiers with pop icons like Mickey Mouse or Jimi Hendrix, is a critique of the modern world, particularly consumerism and the idea of the American Dream. Although he has increasingly shown in galleries, he approaches murals with the same anarchic energy as his in situ works in public spaces. 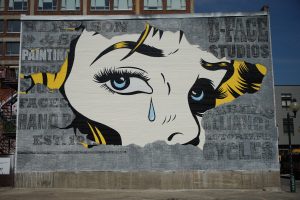