The American artist was born in 1928 in Jerry City, Ohio. Tom Doyle discovered his passion for sculpture while watching the village blacksmith. In 1953, he earned a master’s degree in fine arts from Ohio University. While Doyle was still a student, famous artists Roy Lichtenstein and Stanley Twardowicz took him under their wing. In 1957, he moved to New York and became friends with painter Frank Kline.

Doyle was heavily influenced by abstract expressionism and was fascinated with cantilevered installations (elements supported by other elements that are themselves in midair). Made primarily of wood, his sculptures give the strange impression of being rough, massive structures that might just float away. Ranging in size from small to colossal, Doyle’s sculptures seem to defy gravity and exist in perfect balance.

His work has been seen in various museums in the US, including the Brooklyn Museum, Institute of Contemporary Art in Philadelphia, Los Angeles County Museum of Art, Walker Art Museum and Whitney Museum of American Art. His work has also been showcased in galleries in Germany, Switzerland, Sweden, France and Italy. Tom Doyle died in 2016 in Connecticut. 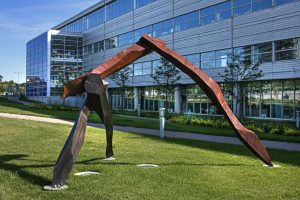