George Dyens studied sculpture with artist Yossip Zadkine at La Grande Chaumière de Paris, then at the École nationale supérieure des beaux-arts de Paris. During the 1960s, he represented France at numerous international events, before moving to Canada in 1968. In the early 1980s, he discovered holography. His holosculptures have been displayed at the Museum of Holography in New York and were brought together in a retrospective at the Musée du Bas-Saint-Laurent in 2010. Dyens has produced a number of works of public art, among them Boomerang for the Musée de la civilisation in Québec City. 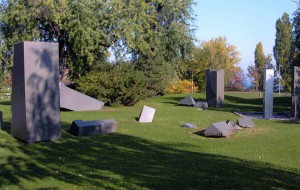