Born in Sainte-Marthe, Saskatchewan in 1942, Joe Fafard is considered one of the most original Canadian artists of his generation. Coming out of the folksy ceramics movement that flourished in the Canadian and American West in the early 1970s, his art evolved to embrace “nobler” sculptural techniques like bronze casting and the chasing of steel, as well as more classical subjects, such as figures of artists and animals. In fact, in 1985 Fafard opened his own foundry in Pense, Saskatchewan. His bronze bestiary of colts, calves, cows, horses and bulls has earned him uncommon recognition amongst the public and institutions alike. His sculptures can be found throughout Canada, and his cows have become one of his trademarks. Seven big examples of these make up The Pasture, which has stood on the large central lawn of the stately Mies van der Rohe–designed Toronto-Dominion Centre in Toronto since 1985. The Montreal Museum of Fine Arts mounted an extensive retrospective of Joe Fafard’s work in 1996. In 2007, Regina’s MacKenzie Art Gallery and the National Gallery of Canada organized another major exhibition of his art that, over the space of two years, travelled to six different Canadian museums. 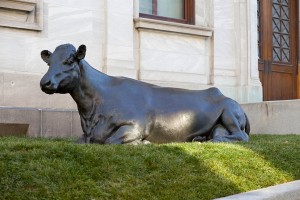