Sen2 is one from a generation of artists who are mixing street art, grafitti and pop in a new and dynamic way. Born in Puerto Rico in 1969, Sen2 first saw graffitti on a trip to the U.S. in the 1980s.  It was love at first sight and he knew he wanted to be a graffitti painter. After moving to the U.S. in 1986 and joined “TATS Cru”, a group of Bronx-based graffitti artists and street muralists whom the NYT has called  a “legend” in the Bronx.

Sen2’s work has been exhibited at the Smithsonian, Boston Center for the Arts, repeatedly in Europe and as part of  the “2013 Urban Art Biennale” at the Rammelsberg Museum in Germany. 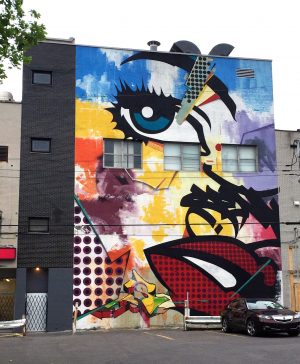