Born to Italian parents in Yugoslavia, Vittorio Fiorucci arrived in Montréal at the age of 19 and became friends with many local artists, including Guido Molinari, Jean-Paul Mousseau, and Armand Vaillancourt. By turns illustrator, graphic designer, writer, caricaturist, photographer, set designer, cartoonist, publisher, and sculptor, he is known mainly for his illustrations and is among the best-known Canadian poster artists on the international scene. One of his cartoon characters became the famous Just for Laughs Festival mascot, Victor. 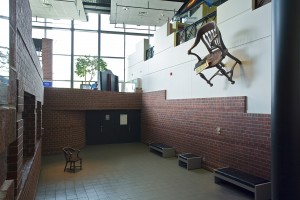