FIVE EIGHT is a multidisciplinary artist, born and based in Montreal, Quebec.  Primarily a painter with a graffiti art background, his style and technique arise from concerns involving the graphic evolution of stylized letterforms.  Favoring bold aesthetic over political commentary, the impact of his murals is maximized by dynamic compositions and vivid contrasting colors.  Between 2009 and 2014 his work was largely presented in group shows and Canadian mural festivals, as well as private and corporate commissions.

Having produced a series of neon-inspired paintings and murals, FIVE was motivated to learn glass bending.  In 2014 he began producing sculptural installations under the mentorship of glass artist Gerald Collard.   In this exploratory period FIVE is introduced to new media through the sign fabrication, wood, and metal trades, each bringing new considerations to the process of translating his work from two to three dimensions.

FIVE is currently interested in learning about new processes and media from experienced artists and trades-people, and seeks to collaborate with artists with similar interest in evolving their work beyond two dimensions.  In 2017, FIVE is invited to several European mural festivals to produce works and engage with international artists in exchanges of knowledge and ideas. 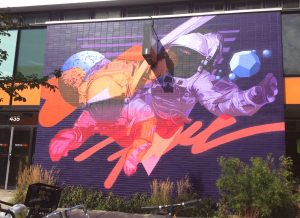