Born in Montreal, Françoise Gosselin has been a mural artist for 25 years, having studied at the École des Beaux-Arts de Montréal. Since 1996, she has dedicated her life as a painter to creating large works in a naive-narrative style for public spaces.

Her works can be found in many different places: Institut de réadaptation de Montréal, Hôpital Sainte-Justine in Montreal, Manoir Rouville-Campbell in Mont-Saint-Hilaire, CHSLD Notre-Dame-de-la-Merci in Montréal, Institut de l’hôtellerie et du Tourisme du Québec, in an IGA supermarket in Montreal, at the Bibliothèque de Saint-Lambert, the Bibliothèque Gabrielle-Roy in Quebec City, the Maison de l’Alzheimer and the Centre de la Petite Enfance (CPE) Tchou-Tchou in Bordeaux-Cartierville, the Jardins de Métis in Grand-Métis and the General Assembly Lobby of UNICEF headquarters in New York.
The artist’s mission is to describe people’s daily lives. Her works are an invitation to enter a world where wonder and fantasy are the main actors. The atmosphere of her paintings evokes happy times and a world in which it is good to live and take refuge. The artist stages the painting and invites each spectator to develop their own story within it. 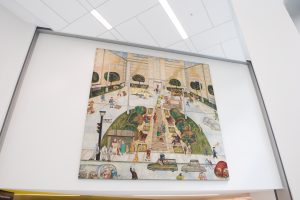