Born in Thurlow, Suffolk in 1930, Elisabeth Frink studied at the Guildford School of Art from 1947 to 1949, and then at the prestigious Chelsea School of Art until 1953. At the time she came on the art scene, sculpture was experiencing great popularity with both the public and collectors; once she had completed her studies, Frink was given an enthusiastic welcome into the London art world. In 1953, the Tate Gallery purchased one of her works, Bird, a theme that was to occupy her over two decades. That same year, Frink was given her first exhibition at London’s Beaux Arts Gallery, then run by Helen Lessore. She also began to teach at Chelsea as well as Saint Martin’s School of Art. Frink was the recipient of many awards throughout her long and prolific career, as well as honorary doctorates from the University of Surrey (1977), Cambridge (1988) and Oxford (1989). Appointed a Dame Commander of the Order of the British Empire in 1982, she died in the English town of Blandford Forum in 1993. 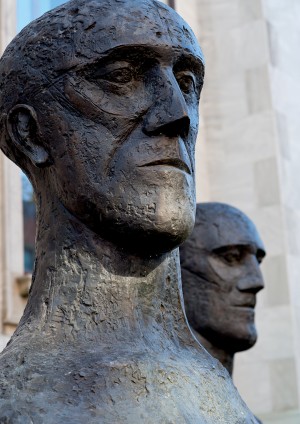