After attending the École des beaux-arts de Montréal from 1959 to 1961, Jacques Hébert was initiated to ceramic arts by Claude Théberge. Then, for a dozen years, he was the master craftsman for muralist Jordi Bonet, with whom he produced numerous large-scale projects, including for La Place des arts de Montréal, Expo 67, Le Grand Théâtre de Québec, and many others in the United States and Canada. In the late 1970s, after a stint in the studio of Roland Gingras, Hébert co-founded a press agency and turned to design; later, he took up cabinetmaking. 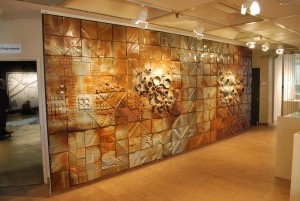