Both architect and artist, Hal Ingberg earned his BA in architecture at McGill University in 1985. He completed his MA in architecture at the Southern California Institute of Architecture, in Los Angeles, in 1988. Ingberg is known for his architectural work and his research on colours. His works of public art include Katsu for Théâtre de Quat’Sous in Montréal in 2009, and Papa for the National Capital Commission in Gatineau, in 2010. 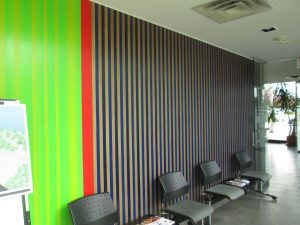