Born in Vienna in 1924, Anne Kahane immigrated to Montreal with her parents when she was two. After attending the École des beaux-arts de Montréal, she studied at the Cooper Union School in New York City from 1945 to 1947.

In 1953, Kahane won a prize at the first International Sculpture Competition sponsored by the Institute of Contemporary Arts in London. In 1958, she represented Canada at the Venice Biennale. She quickly gained prominence as an artist, with exhibitions at the Montreal Museum of Fine Arts and the Musée national des beaux-arts du Québec, among others.

From 1950 until the 1970s, Kahane favoured wood as a medium. During the period, she created several public artworks, including one for Montreal’s Place des Arts. By 1978, she had switched to sheets of aluminum, a material that gave her a flexibility impossible to obtain with wood. Although the brass sculpture in the Town’s collection was made long before the late 1970s, it is departs from the esthetic criteria in fashion at the time by stepping away from abstraction and using construction and assembly as opposed to the more traditional techniques of modelling and direct carving. 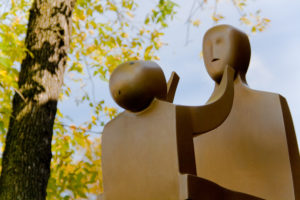