George Keyt is considered the most important Sri Lankan painter of the twentieth century. Self-taught, he devoted himself to painting when he was 26 years old. Inspired by an updating of the Buddhist tradition, Indian decorative art, and the modern art of Picasso and Matisse, Keyt’s painting is characteristic of the modernization of Sri Lankan society. Known also as a prolific poet and author, Keyt’s artwork has been exhibited mainly in India and Sri Lanka, as well as in the great Western capitals. In the 1960s, he began to produce murals resulting from public and private commissions. 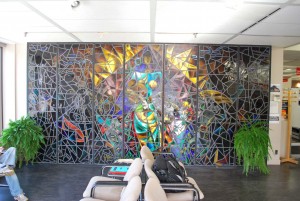