Luis Feito was born in Madrid in 1929 and studied at the San Fernando School of Fine Arts. His travels led him to Paris in 1956.  As a figure of the avant-garde movement, he had exhibitions in France and in Spain.

Feido, who connected with lyrical abstraction, founded the El Paso group (1957) – one of the most influential movements of Spanish painting of the second half of the 20th century. His art was displayed at the Musée du Québec in Quebec, at the Musée d’art contemporain and at the Galerie Gilles Corbeil in Montreal. He lived in Montreal from 1981 to 1983 and moved to New York at the start of the 1990s.

His art is on display in many renown museum collections including the Guggenheim Museum in New York and the Musée national d’art moderne de Paris.  As an internationally renown artist, Luis Feito won several awards including one at the 1st Paris Biennale in 1959 and the David Bright Award at the 30th Venise Biennale reserved for artists under the age of 45. He was also invited to join the Ordre des arts et des lettres de France. He now lives in Madrid.

His first paintings include figurative elements : the stroke of his pencil dominates the paint of his brush. After briefly exploring cubism, Feito focused more on lyrical abstraction. 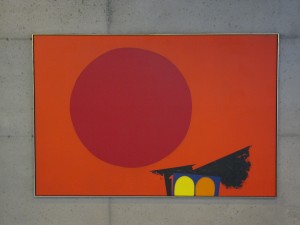