He is known for his sculptures of tightly packed people made from clay, with works on McGill College Avenue in Montreal; the Tuileries, Paris; Georgetown, Washington, D.C.; and Madison Avenue, New York. He dies in Paris at the age of 87. 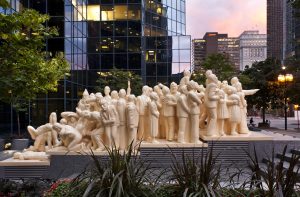