Claude Mongrain received his training at the École des beaux-arts de Montréal (1966-1969) and was a professor in the department of visual and media arts at the Université du Québec à Montréal from 1985 to 2003. His sculptures have been exhibited across Canada and have earned him an extensive bibliography. The objective of his assemblages is to be resolutely misleading in their presentation of forms and materials. Columns of aluminum and zinc, for example, turn out to be made of wood, while a plaster cast masquerades as an assemblage of folded fabric and polystyrene parodies marble. A critical and ironic perspective on the stability and precarious balance of the “monument” permeates Mongrain’s work.
(Source : Historical Dictionary of Quebec Sculpture in the 20th Century) 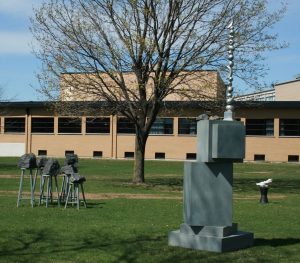