For Anne Sophie Morelle, life as an artist is much more than a profession, it is a vocation and an opportunity to express her inner most feelings. Born in Belgium, Anne Sophie Morelle is a sculptor recognized for her human figures. She has long been aware that her centre of energy is focused in her hands, and began her professional career as a physiotherapist and osteopath. At the same time, she studied sculpture at the Académie des Beaux-Arts de Saint-Josse, and the Académie des Arts de Braine-L’Alleud (Belgium). For the past 20 years, the artist has been manipulating matter in a systematic study of the human soul. Sculpture is simply a medium for the expression of her continually growing desire to communicate the very essence of the human state, through the density and maturity of its matter. Anne Sophie Morelle’s human-scale sculptures are imbued with spirituality. A man, a woman, a young couple, an old woman; her work is an expression of our physical relationship with space. The truth resonating from her work is not felt on an anatomical level, but rather in a psychic sense. Her sculptures have been shown at individual and collective exhibitions, notably at the international art fair in Toronto in 2009. 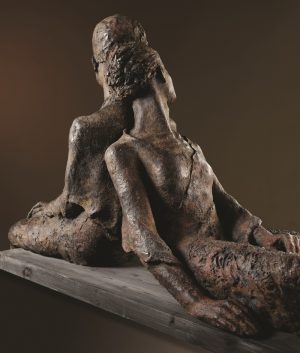