Jean-Paul Mousseau was born on January 1, 1927, in the working-class neighborhood of south-central Montréal. He was introduced to the visual arts during high school, at Collège Notre-Dame, and quickly developed an interest in this form of expression. He first exhibited his work in 1944, after joining the Contemporary Arts Society. He then took part in the Spring Exhibition at the Montréal Museum of Fine Arts (1945) and in the first Automatist exhibition (1946), alongside Paul-Émile Borduas, Marcel Barbeau, Pierre Gauvreau, Roger Fauteux, Fernand Leduc and Jean-Paul Riopelle, among others. In 1948, after participating in a number of other group shows including events in Paris and Prague, Mousseau had his first solo exhibition, featuring hand-painted fabrics, followed by a second, presenting gouaches. This was also the year the Refus global manifesto was published, with Mousseau as one of its signatories.

Noteworthy among his many subsequent exhibitions is the one organized by the National Gallery of Canada and the Vancouver Art Gallery, Recent Quebec Painters, which travelled for more than a year in 1951 and 1952 in Western Canada and the United States. The multi-talented Mousseau also worked in a variety of art forms, creating sets, costumes, lighting and stage designs for plays and other productions.

Mousseau began exploring new materials in 1957: colored resin and fibreglass. The following year, he embarked on a series of projects for incorporating art into architecture, in collaboration with the ceramist Claude Vermette. He then went to the Massachusetts Institute of Technology, in Boston, for a course called Color and Science, and the year after that he exhibited a fibreglass panel along with a group of pastels. In 1960, one of Mousseau’s “light-objects” earned him first prize in the industrial design section of Québec’s province-wide art competition.

At a time of radical social change in Québec, Jean-Paul Mousseau was a fully committed player who always displayed a strong desire to democratize art by integrating it into the urban environment. Mousseau has left us a rich, varied body of work with a vibrant presence in our daily lives. 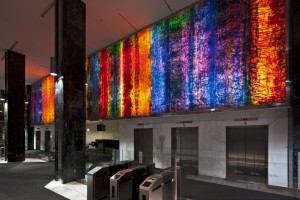