Jean Noël was born in Montreal (Quebec) in 1940. After studying management, he attended the École des beaux-arts de Montréal from 1960 to 1963. After two and a half years, he prematurely abandoned his studies after deciding that it wouldn’t be his vocation. He moved to France in 1975. He taught sculpture at the Parsons School of Design in Paris from 1982 to 1988. While in Paris, he participated in several collective exhibits in addition to solo ones in Quebec, Ontario and France where his art would belong to several collections. Jean Noël created several pieces that integrated art to architecture in Quebec and in France. He lived in Paris while continuing to work and exhibit in Montreal.
His career launched when the art scene in Montreal was booming. At an early stage, Jean Noël chose non-representative art. Ovoid-shaped sculptures made of Plexiglas, thermoformed Plexiglas, vinyl and fabrics are deployed in a given area and are accompanied by sectioned puzzles made of painted metal. In the 70s, the artist used photography, videos and body art. His short films show a transformation of an area or a body and feature a performance.
In the 1980s, his pieces stray from sculpture’s traditional definition and enclose themes such as passage, lightness, fluidity and the border between balance and chaos. Jean Noël became more and more attracted to playing on shapes and forces. He used several different materials such as fiberglass, steel rods, undulated polyester, steel and enameled wood. His sculptures often hang from above. When they hang from a wall, they are hung with fragile very slim wires which seem to barely exist, like needles or glue spots. The artist plays on balance, imbalance and cast shadow. 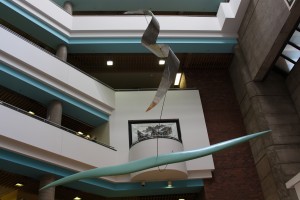