Paul Romain Marie Léonce Chevré is a french sculptor born in Brussels on July 5 in 1866. Really famous in Canada, his father was the sculptor Romain Paul Chevré. He exposed for the first time in 1890. It’s in 1898 that Quebec city asked him to create his Samuel de Champlain monument which made him famous. In 1912, Paul Chevré sculpted Wilfrid Laurier’s torso for the Château Laurier hotel in Ottawa. To participate to the building’s inauguration he went on the Titanic in April 1912. The boat wrecked in the night of the April 14 to the April 15 an Paul Chevré is miraculously saved by a life raft. He passed the two years after that incident travelling between Canada and France. It’s in that context that the artist sculpted Marianne ou la République, an important bronze statue, just before giving it to the Montreal’s Union Française in 1913. The statue is still in front of the association historic building’s entrance, on
the Viger East avenue. 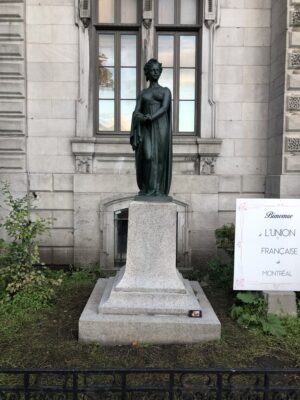