Karine Payette holds a MFA from UQAM, she lives and works in Montreal. Working primarily in the medium of installation, but also that of photography and video, Karine Payette creates fictional environments that function as freeze frames in which narratives are suspended. In her work, she uses everyday objects to construct extensive dream-like scenes in a hyperrealist manner. These mises-en-scène serve to hint at a potential narrative which evokes the precariousness of our surrounding world. Through the playful use of everyday objects that are transposed into extraordinary situations, she craftily toys with our vision of things, so as to stimulate reflection about the instability of the materials and forms which are part of our living environments. She questions notions of comfort and displeasure in a perpetually transforming world.

Her works have been displayed in solo exhibitions, notably at Maison de la culture du Plateau-Mont-Royal (2014), the Galerie de l’UQAM (Confort instable, 2012) and at Le lieu, Centre en art actuel in Quebec City (L’autre dimanche matin, 2012). She has also participated in group exhibitions, in particular in the 31st International Symposium of Contemporary Art of Baie-Saint-Paul held under the theme of To Act, and in the inaugural exhibition of the Centre Bang in Chicoutimi with her installation À distance perdue. In 2014, she was as part of the documentary series on contemporary art directed by Arsenal art contemporain, in partnership with the MACM. 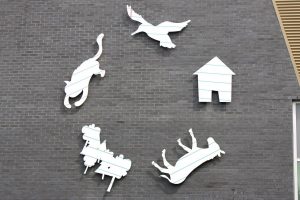