Robert Pelletier, a painter and sculptor, graduated from the École des beaux-arts de Montréal in 1936 and later worked as a teacher for the Montreal Catholic School Board. He produced a first bust of Quebec strongman Louis Cyr that was displayed at the Art Association of Montreal (now the Montréal Museum of Fine Art) in 1941. Almost 30 years later, he made preliminary drawings for a monument to Cyr, and the project was proposed first to the municipality of Napierville. Finally, the project was commissioned by Cyr’s grandson, Dr. Gérald Aumont, in 1970. Another of Pelletier’s other significant artworks is the bust of Édouard Montpetit, founder of the School of Social, Economic, and Political Sciences at the Université de Montréal. 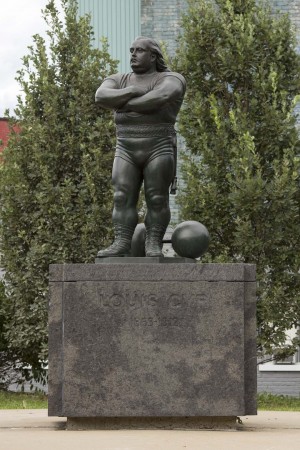