Gilbert Poissant was born in Iberville, in the Montérégie. A ceramist by training, he has been able to include other technical and aesthetical horizons in his practice. This multidisciplinary artist works on murals, installations and sculptures simultaneously, and uses various materials, such as ceramics, wood, stone, found objects as well as digital procedures.

Appointed to the Royal Canadian Academy of Arts in 2003, he also received the Career scholar award from the Conseil des Arts et des Lettres du Québec in 2013.
In addition to his participation in several international events and creation residencies, Gilbert Poissant was also invited to create a permanent structure at the FuLe International Ceramic Art Museums in China, in 2007. In that same year, he participated in a collective exhibition at the Mackenzie Art Gallery in Regina, Saskatchewan, and at the Surrey Art Gallery in British Columbia. Many of his works are featured in public and private collections, including those of the Musée d’art contemporain de Montréal, the Musée national des beaux-arts du Québec and the Canadian Clay and Glass Museum in Waterloo (Ontario). 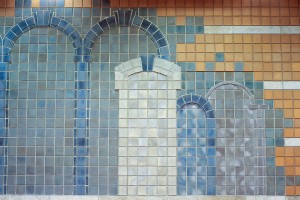