Born in St. Thomas, Ontario, Roland Poulin moved to Montréal with his family when he was four. He is a graduate of the École des beaux-arts de Montréal, and his works are in numerous public collections. In 1994, the National Gallery of Canada presented a retrospective of his works, and in 1999, the Musée d’art contemporain de Montréal also presented an exhibition devoted to his works. On the occasion of the 25th anniversary of the Ordre national du Québec, he created Nos regards se tournent vers la lumière (2010), a work of public art situated at the western entrance to Promenade Samuel-De Champlain, in Québec City. 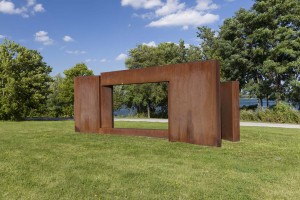