Originally from France, SbuOne moved to Montreal in 2003. Influenced by what surrounds him, he began to draw fiercly at a young age. Years later, he works as a freelance illustrator, graphic-designer, photo editor and muralist, going from one project to another. As an artist he continues to pursue his personal creative path, by painting, drawing, designing stickers and creating zines. Although his style is constantly evolving, his work can best be described as a mix between abstract graffiti and comic book style characters. He took part in the 5th edition of the MURAL festival in Montréal in 2017. 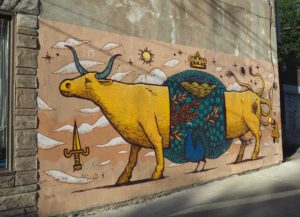