Influenced by vintage Mexican comics, specifically, in the graphic style from the 1950s, Smithe bagan to write graffiti, at the age of 13. In the beginning, graffiti was just for fun and a hobby. Today this autodidactic and evolutionary artist constantly reinvents his own style and working within a broad range of themes from existentialism, human singularity to artificial intelligence. Defragmentation, a common thread in his work is used as to show the characteristics that power his characters and machines. He is commonly known for his graffiti but has also traveled globe working in illustration, design, sculpture and music. 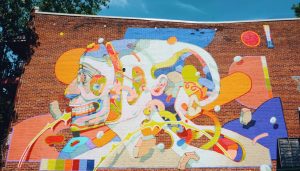