Born in Toronto in 1928, Michael Snow is considered one of the most significant contemporary Canadian artists, and also enjoys an international reputation. A multidisciplinary artist, his creations include paintings, sculpture, cinema, video art, photography as well as music.

Michael Snow attended the Ontario College of Art and specialized in design while he played piano in a jazz group and developed his painting skills independently. In 1952 he completed his studies and spent eighteen months travelling in Europe.  Back in Toronto he had his first solo exhibition at the Avrom Isaacs’ Greenwich Gallery. He produced his first film while working for Graphics Film, where he met artist and filmmaker Joyce Wieland (1930-1998) to whom he was married. The couple settled in New York in the early 1960’s until their return to Toronto in 1972.

Michael Snow has been honoured with solo exhibitions and retrospectives around the world including: the Venice Biennale in 1970; Documenta 6, 1977; Centre Pompidou, Paris 2002-03. He has earned numerous international awards and titles and his works in all media are found in public collections around the world. (Source : National Gallery of Canada) 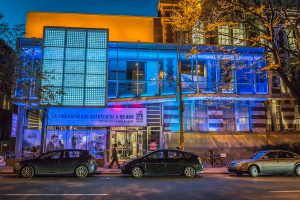