Tristan Eaton started pursuing street art as a teenager, painting everything from billboards to dumpsters in every city he lived including London, Detroit, and New York. He designed his first toy for Fisher-Price at 18 years old and soon became a driving force in the world of designer toys. Eaton’s work for Kidrobot, including the famous Dunny and Munny art toys, helped him achieve international status and an ever expanding fan base. Eaton’s large scale mural work features a meticulous, visual collage of pop imagery, text and sharp graphic elements all executed freehand using spray paint on a colossal scale. Eaton now focuses on his Fine Art and large-scale mural work full-time, which can be found in dozens of cities across the globe from Paris to Shanghai 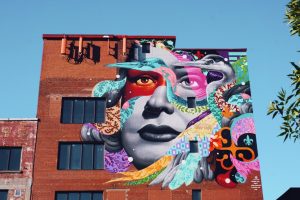