Herman J. van der Heide, a Dutch sculptor, was born August 12, 1919, in Sneek, the Netherlands, and died in 1998. During the Second World War, he took night courses in drawing and painting at the Minerva de Groningen Academy; later, he studied at the Free Academy in The Hague. A self-taught sculptor, he was, among other things, an interior decorator for various corporations. In 1947, he moved to Amsterdam, where he lived until 1955 and worked as an exhibition organizer. He then taught at the Royal Academy of Visual Arts in The Hague and acted as an urban planning and architecture consultant for the city of Amsterdam. His works fall within the constructivist current. 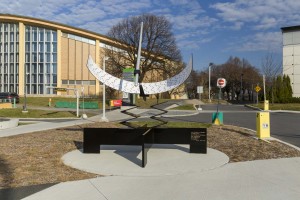