Gertrude Vanderbilt Whitney was born in 1875 in New York, granddaughter of American business magnate Cornelius Vanderbilt. An early interest in art led her to take up sculpture after marrying. She studied in Paris and New York and in 1907, set up a studio in Greenwich Village. Besides pursuing her own work as a sculptor, Whitney helped to support other New York artists. She provided encouragement and patronage to a number of notable painters and sculptors. She also collected art, and founded the Whitney Museum of American Art in 1930. 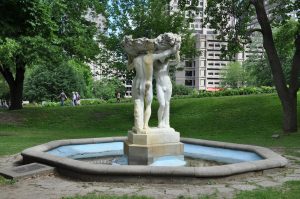