A native of Montreal, where he lives and works, François Vincent received a bachelor’s degree in linguistics in 1972 and another one in fine arts in 1974 from Université du Québec à Montréal. He is a pioneer in contemporary printmaking within the Atelier Circulaire collective, and his works have appeared around the world (Argentina, Canada, Spain, the United States, France, Japan, and Portugal).

Winner of the 1990 Grand Prix Loto-Québec Printmaking Competition and the 1997 Prix Jacques-Cartier des Arts, François Vincent has been a featured artist in many private and public collections : the Canada Council Art Bank, the National Bank of Canada, Loto-Québec, Musée national des Beaux-arts du Québec, and Musée d’Art contemporain de Montréal. His works are also displayed in some public venues thanks to the Politique d’Intégration des Arts à l’Architecture program, in particular to the Institute of Cardiology of Montreal and more recently in the new Research Center of the CHUM. In Quebec he is represented by Galerie Lacerte Art contemporain. 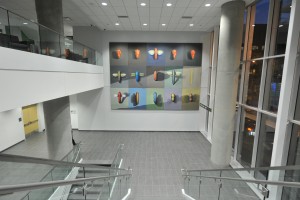