Whatisadam (WIA) is a prolific street artist and an avid world traveler, born in Montreal. Infused with Canadian imagery, his style is reminiscent of vintage comics and pop art. North American wildlife and landscapes are common themes throughout his work. WIA often reimagines them to feature elements of urban culture including his iconic cans of maple ‘sizzurp’, tattooed ducks, prostitute deer, and hockey hoodlums. In addition to his ongoing street work of wheatpastes and stencils found throughout the city, Whatisadam has a diverse studio practice, including silkscreen prints, large-scale murals, installations as well as a proclivity for found objects. Whatisadam’s work can be found in the streets of New York, Paris, Toronto, Miami, Mexico City and of course in his hometown of Montreal. 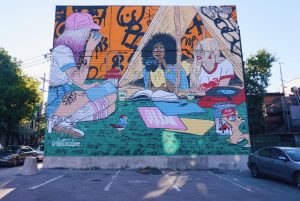