Walter Yarwood worked for a publicity firm while painting for leisure after completing his studies at the Western Technical High School in Toronto. In the 1940s, he was invited to join the Royal Canadian Academy of Arts (RCA). In 1950, he studied in the San Miquel Allende school of fine arts in Mexico City for two years.
A new artistic vocabulary emerged in the 1940s with the birth of Abstract expressionism in New York and Automatism in Montreal, whereas the Group of Seven dominated the art scene in Toronto. Water Yarwood participated alongside other artists in the creation of the Painters Eleven in 1953 – united all with a common interest for abstract art.
Throughout the 1960s, the artist progressively abandonned painting and turned to sculpture. He then fulfilles many public art orders, mainly in Toronto. Yarwood first worked with recuperated metals and objects he stumbled upon. He then worked with pure metal such as aluminum, allowing him to work on surfaces and create effects with acid.
At cusp of the 1970s, he stopped taking public orders and taught drawing, photography and sculpture at the Humber College in Toronto. He moved to Port Rowan, a small town near Lake Erie in 1979. Freed from his obligations and any form of pressure, he started painting again, with watercolors. He painted for 25 years without any hiatuses. Oil and distemper paintings in the Summer; watercolor paintings in the Winter.
His sculpture are on display in public areas at the University of Toronto, at York University, at the Sidney Smith Hall in Toronto, the Winnipeg International Airport, in federal and Ontarian government buildings. The artist’s pieces are displayed in many important collections in the National Gallery of Canada, The Art Gallery in Toronto and The Roberth McLaughin Gallery. 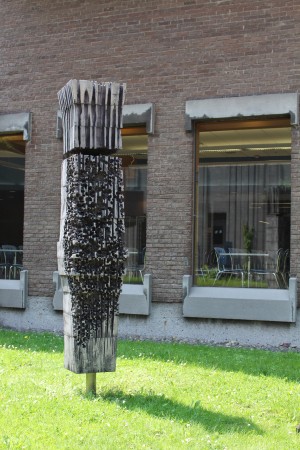