Gérard Zahnd, a versatile artist who worked as a poster designer, a ceramist, a designer, a drawer, a muralist and a painter, was born in Vevey (Switzerland). He studied at the École des beaux-arts de Lausanne and at the École suisse de céramique in Chavanne-près-Renens. His professional career was launched in Europe where he created his first posters and participated in many exhibits, notably the Musée cantonal des Beaux-Arts de Lausanne in 1962.
Zahnd moved to Montreal in the early 60s. He worked closely with architects in order to create art and integrate to the architecture of public buildings in the metropolis and the suburbs. The integration program instated by the Quebec government was at in its embryonic stage. The architects chose with whom they collaborate. The artist worked on public buildings, churches and metro stations. His pieces are abstract and mainly feature geometrical shapes and colors.
The 70s were a fertile decade. His posters often stand out because of their minimalism, their great visual efficiency and often their humor. From 1968 to 1970, the artist worked for the Théâtre d’Aujourd’hui, for the Théâtre du Nouveau Monde from 1973 to 1980 and for the Théâtre populaire du Québec from 1975 to 1978. He worked for the Théâtre du Rideau Vert from 1967 to 1980. His work notably includes the poster for the Belles-Sœurs in 1971 and La Sagouine in 1973.
In 1987 and 1988, the artist dedicated his life to painting. He regularly participated in group exhibitions. He likes to surprise, experiment in order to not repeat himself. He doesn’t limit himself to one medium in particular. His paintings feature collages which notably question the feminine image in mass culture. He sometimes uses geometrical shapes, placing his work near the Plasticien mouvement, and sometimes near the Lyrical abstraction.
His colors are often developed, sometimes sober, sometimes bright. 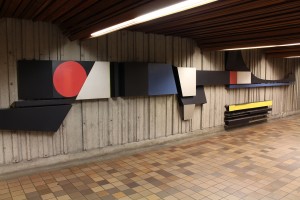