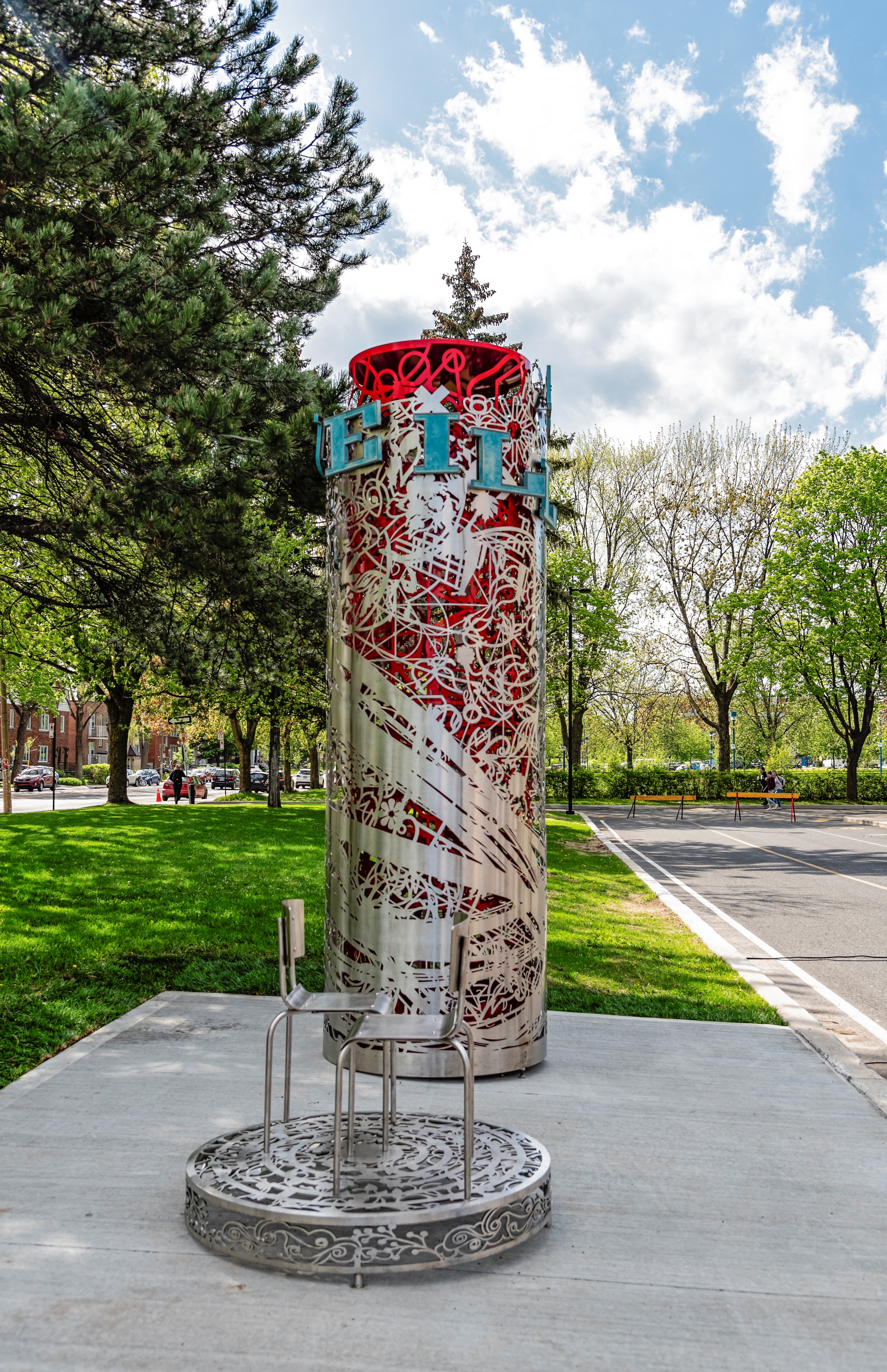 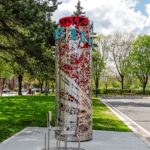 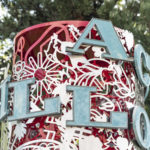 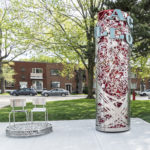 To mark its 50th anniversary, Collège Ahuntsic organized a public art competition in the spring of 2017. The competition was won by Michel Goulet with the work entitled A.C.C.U.E.I.L.L.O.N.S. Installed on an extension to the sidewalk in front of the entrance to Building A, the work is composed of two parts: two slightly misaligned chairs face one another beside a red column covered in stainless steel and letters.

The column of A.C.C.U.E.I.L.L.O.N.S. is coloured in same the red as that used to define the college’s visual identity. It is covered in a tracery of grey steel to which are attached a series of letters in blue-tinted aluminum. These are the letters that made up the institution’s sign from 1969 to 2016, when the college modified its original graphic signature. Removed from the façade, they were made an integral part of the public sculpture competition. The artist formed the letters into the anagram A.C.C.U.E.I.L.L.O.N.S., a reference to the college’s inclusive values and the broad diversity of the population it serves.

The use in Michel Goulet’s work of the cylindrical form of the Morris column is designed to evoke the performing arts. It was inspired by the sculpture’s physical proximity to the Collège Ahuntsic auditorium, inaugurated in 2017 under the title Espace Le vrai monde ? There are nonetheless differences between the column of A.C.C.U.E.I.L.L.O.N.S. and its European ancestor, notably the red paint overlaying the steel. This serves as a chromatic echo, linking the college’s main entrance at 9055 Saint-Hubert to the smaller one at 9155 Saint-Hubert, and creating a visual marker of the college’s span.

The column of A.C.C.U.E.I.L.L.O.N.S. is accompanied by two chairs positioned nearby that many will recognize as school chairs, a direct reference to the teaching institution of which the work is now part. Slightly raised above the sidewalk, they encourage spectators to sit down for a while, to look around and perhaps chat to someone sitting in the chair placed diagonally opposite. There’s plenty to talk about: details of the surroundings, college life, the meaning of the various signs and symbols integrated into the steel tracery, the words that can be formed from the letters that adorn the column, and the stories they evoke.

A.C.C.U.E.I.L.L.O.N.S. is a space of communication: while commemorating the history of Collège Ahuntsic by incorporating elements from its past, the diptych also embodies a vibrant vision of the institution’s future. Come and see it, get close to it – sit down!