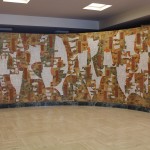 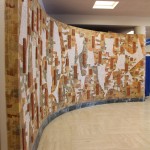 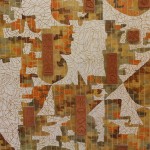 This mural depicts people and events that marked the history of nursing from the Middle Ages to today. A board situated at the right extremity of the piece presents all the mural’s elements.
The examples – more often females – follow each other through the course of history from antiquity to modern times, through the beginnings of Christianity, the Middle Ages and the Renaissance. In regards to the modern period, the focus is on the birth of the nursing in Canada and on the establishment of schools.
The viewer will find, represented by this mural, Jeanne Mance, the country’s first nurse and founder of the Hôtel-Dieu de Montréal, St. Marguerite d’Youville, founder of the Soeurs Grises who took care of the sick at the Montreal General Hospital, Agnès Snively a nurse trained following the principles of Florence Nightingale, who deeply changed the profession at the turn of the 20th century, and finally Mère Allaire, who founded the Institut Marguerite d’Youville in 1935.
The piece was created with rectangular tiles with different finishes and colored in orange, green, chestnut brown and mustard yellow, for the  background. The artist used white tiles to depict the history of nursing’s key personas. He inserted small terracotta patches embossed with illustrations of tools or with organizations’ acronym related to the nursing. The final assemblage bears resemblance to a puzzle. All the sections were made and baked in the studio following primary sketches. They were then assembled on the spot.
From far away, the mural seams almost abstract. The white tiles’ curved and hatched forms bear witness to the artist’s technical mastery and give to the whole a dynamic aspect. Their placement invites the reader to observe from left to right, enforcing the chronological approach. The colors are representative of the 1960s and are applied little by little on the background tiles. All of the above contributes to the balance of the composition and brightens the hall.