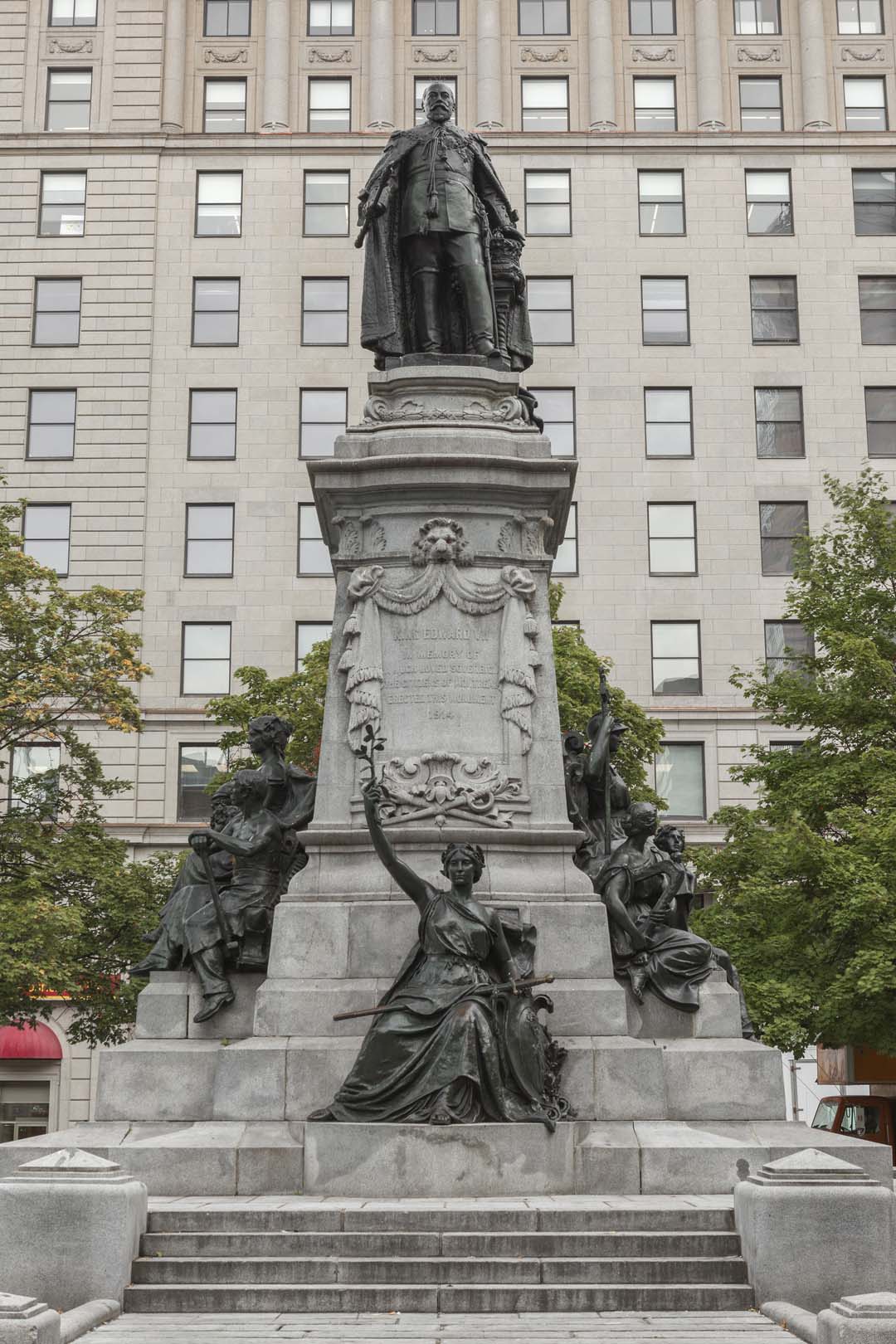 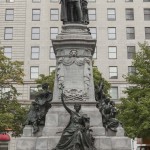 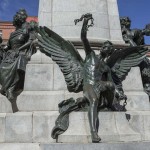 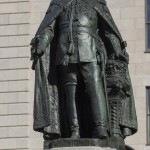 At the time when a national competition and public subscription were launched for execution of a monument to Edward VII, Phillips Square was the obvious site for installation of the artwork: in the heart of the fast-growing mercantile city, this public space, unlike Dominion and Victoria squares, did not have a monument.

The monument rises from a sectioned square base placed at the centre of a two-level terrace composed of an area of lawn and a granite promenade. The pedestal has three sections: a stepped base on which have been placed two statuary groups and two sculptures of individuals; a central column bearing inscriptions on its north and south faces; and a top part, stepped and set back, topped by a platform on which the statue of Edward VII is placed.

The statue illustrates the king’s royal functions: the pose, the clothing, and the objects. Very straight and dignified in his ample ermine-lined coat, he holds the sceptre. The imperial crown sits on a cushion beside him. Although larger than life, the person is portrayed very accurately. However, to describe the Peacemaker’s vision and actions, Hébert used allegories.

In a borrowing from classic Greek tradition, armed peace is personified, on the north side, by a seated woman holding up an olive branch, her sword across her knees and half hidden under the folds of her garment. Her left hand holds a shield – the shield of life – adorned with the figure of a child carrying a platter laden with fruit and an oak branch.

On the east side, the prosperity grouping illustrates the king’s main interests: industry, trade, agriculture, and education, which lead to prosperity. The central female figure, with her horn of plenty, represents trade; the other female figure, a peasant leaning over a wheat sprout, agriculture. The male figure, wearing a worker’s apron and leaning on the handle of his tool, represents industry; the child, sitting cross-legged and absorbed in a book, education.

On the west side, the group representing goodwill between peoples – the only Canadian facet of the composition – includes the four predominant European nations that composed the population of Canada: French, English, Scottish, and Irish.

On the south side, having just broken out of his chains and contemplating the broken links that he brandishes in his right hand, the “genius of freedom” figure symbolizes the first sovereign act accomplished by Edward VII. When he was crowned, he modified the archaic vow to persecute the Catholic religion that the king of England was required to take.

Edward VII was Hébert’s last monumental work and marked the apotheosis of the genre.