The series is devoted to public art in Québec. It immerses viewers in the work of sixteen artists.

Each of eight episodes (in french) allows us to meet two creators and highlights the wealth of Québec public artwork. Creator and Director Suzanne Guy’s ambition was to entice and move viewers, piquing their interest in public art, so they notice and appreciate this art work.

The title À tout hasard (which can be translated as ‘Just by chance’) refers to the relationship a visitor has with the art. Public art appears more or less discreetly in a public space, and asserts its formal, conceptual or temporal characteristics. Some visitors use an itinerary or map to discover art work, but more often, the encounter arises because of a happy accident. As Suzanne Guy emphasized: “…one day, you’re walking more slowly, you’re a bit more relaxed, and all of a sudden, you look up and notice something you’d never seen, even though it was always there. I think that makes the encounter—it’s the randomness.”

The series will have its Montréal premiere at the Montréal Museum of Fine Arts. Episodes will be presented in three sessions, i.e., February 11, 18 and 25, at 6 p.m. The series’ director will attend, together with the artists.

This is the series’ second season, the first Vu par hasard, was presented on ICI ARTV. The second season will be on the air in 2016. 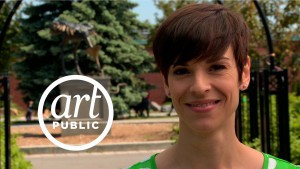 In 2011, ICI ARTV launched Art Public, a series of two-minute documentary clips available online, which invite viewers to discover major art work in Québec. Designed for the general public, with the goal of broadening knowledge of public art, Madeleine Arcand hosted no fewer than 34 episodes, in which she introduced a work, the artist […]